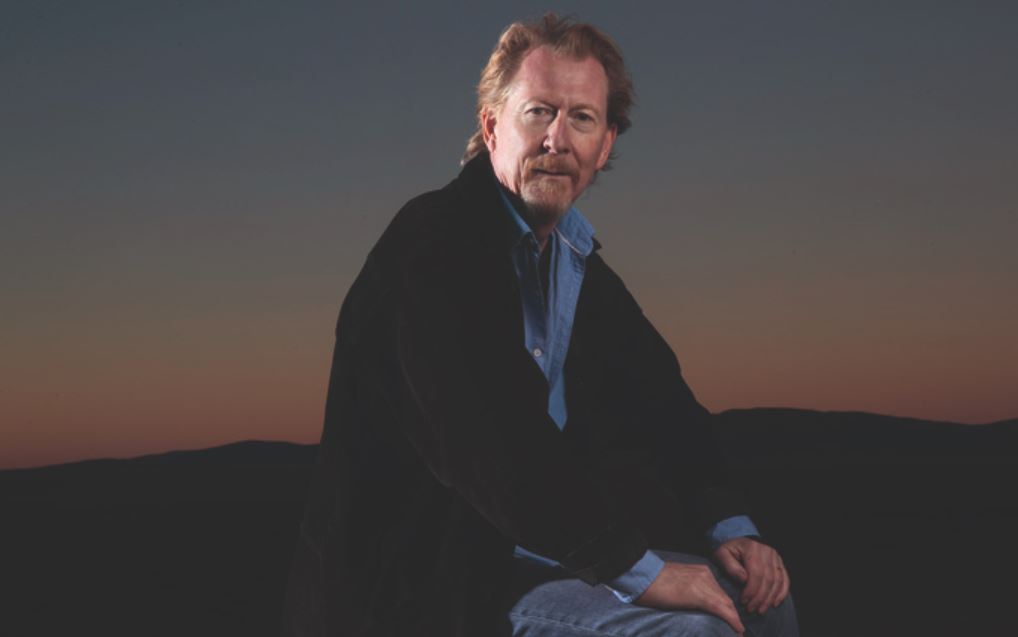 Chris Hammer was born in Tasmania but grew up and was educated in Canberra.  He has worked as a journalist throughout his career covering Australian politics initially, and then becoming a roving correspondent covering international affairs globally.  His most high-profile role during this period was as a roving foreign correspondent for the Australian flagship news programme “Dateline”.  Chris has a Batchelors Degree in Journalism from Charles Sturt University and a Masters Degree in International Relations from the Australian National University

Chris obviously has an intimate knowledge of how the 24 hour news cycle works in todays world and this knowledge is a key feature of both of his crime fiction books.  Chris still lives in Canberra with his wife, Tomoko and their two children, Cameron and Elena.

Chris describes books as an ‘unrivalled, immersive experience’ which will never become obsolete.  He makes the point that with film and video, the driving force is the imagination of the producers of the content.  With books however, the imaginative driving force is equally shared between the author and the reader, thus greatly enhancing the satisfaction and benefit to be obtained.

Chris’ first published work was a non-fiction book entitled The River: A Journey through the Murray-Darling Basin.  This was published in 2010 and was followed in 2012 by another travel writing book The Coast: A Journey along Australia’s Eastern Shores.   These travel books are not reviewed herein but both cover the New South Wales area and are highly regarded by travel writers. 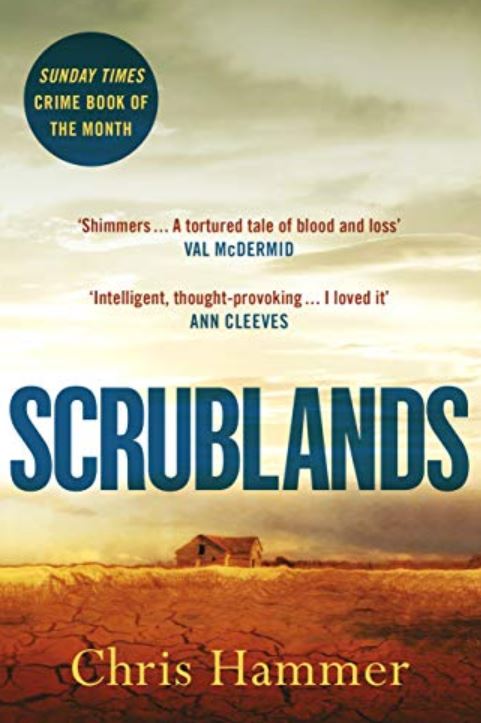 Chris really came to international attention with the publication of his first crime book, “Scrublands”, in 2018.  The book was an immediate publishing sensation selling over 100,000 copies in the relatively limited Australian market alone.  Chris won the UK Crime Writer Award for the Best Debut Book for Scrublands and he was also shortlisted for the US Barry Award.

Scrublands is set in the small fictional town of Riversend in the Australian interior.  Riversend is suffering a prolonged drought and the town is effectively dying with no salvation on the horizon.

The story unfolds after the protagonist, Martin Scarsden is sent to Riversend on the anniversary of a mass killing in order to provide a follow up piece on the impact of the crime on the small community.  Mystery continues to surround the motivation of the priest who shot and killed five while, for no apparent reason, sparing others.  There is no investigation ongoing into the crime and it has effectively been written off as a motiveless mass killing.

However, like the author himself the protagonist Martin Scarsden is an investigative journalist.  While the town is slow to give up its secrets, Martin unravels the mystery, strand by strand and the full background to the crime gradually becomes apparent.  The discovery of the bodies of two German backpackers and the question of whether or not their deaths are linked in any way to the mass killing ensures that Riversend once more becomes the centre of an international media storm.  The author’s familiarity with the workings of the 24-hour news cycle really comes to the fore here and the section of the book where the dying town is briefly revitalised by the media hoards is particularly well drawn.

Depending on the particular version, Scrublands is over 500 pages long.  However, although the pace is relatively slow in places, the story never drags as the relatively slow pace accurately mirrors the difficulties associated with gradually unravelling the mystery.  All of the characters are extremely well drawn, and the author never loses control of the relatively complex plot.

The use of a layout plan of the town is effectively a plot devise in itself and it helps greatly in giving a sense of place to the unfolding action.  The description of the drought conditions and high temperatures being experienced is also extremely well set out – the reader can almost feel the parched heat of Riversend and, in hindsight the bushfires described in the book appears almost as a premonition of the bushfires which were to subsequently ravage Australia  late in 2019.

In summary, the author handles the multiple characters, the relatively complex plot and the overarching atmosphere extremely well.  The fact that Scrublands became something of a publishing sensation in Australia and globally is certainly well deserved and this first outing marked out Chris Hammer as one to watch for the future.

Scrublands is highly recommended for lovers of crime fiction and this reviewer gives it a rating of 9.0. 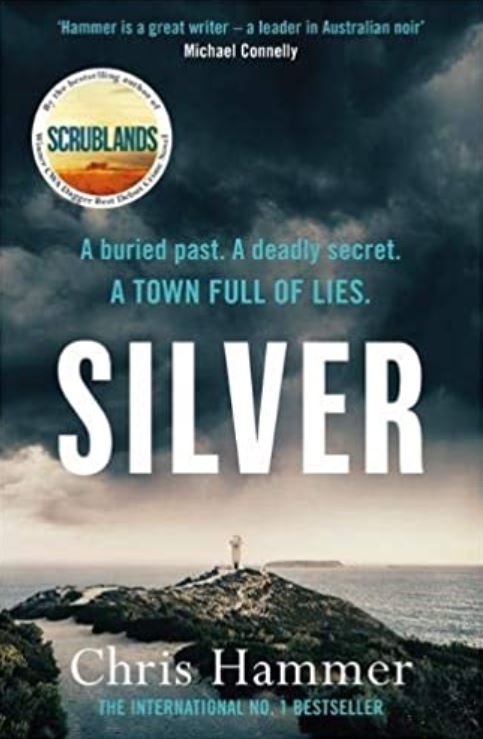 The best-selling author of Scrublands, Chris Hammer follows up his debut novel with a second outing for his protagonist, Martin Scarsden set, this time in the fictional town of Port Silver in New South Wales.  Silver was published in late 2019 and early 2020, and immediately became the subject of significant attention following on from Chris Hammer’s debut outing.

Following on from the events described in Scrublands, Martin Scarsden has taken a time out to write a book on the mass killing described in Scrublands.  His partner, Mandalay Blonde has, in the meantime inherited property in Port Silver and moved to the town, which coincidently is Martin’s childhood home.  In the pursuit of a chance at happiness, Martin is forced to revisit his childhood home having determined never to revisit after the traumatic events of his childhood.

As with Scrublands, events get underway with a bang – Martin arrives back in town to find his best friend lying in a pool of blood with Manalay standing over him.  Obviously, Mandalay quickly becomes the polices’ chief suspect, but Martin refuses to accept this conclusion.

The plot of Silver is relatively complex, and the book contains a multitude of characters.  In addition, the main plot unfolds in parallel with memories of his childhood returning to Martin Scarsden.  Effectively, the present-day plot and a plot from Martin’s past life unfold in parallel.  Despite this complexity, and despite the length of the book, it is fair to say that the author ensures that the pace never flags, and the interest of the reader is retained throughout.

Unlike the debut novel Scrublands however, there are a few items that this reviewer found jarring with the follow up novel:

In summary, I think it is fair to say that the author did not suffer from a “second book syndrome” in that Silver is certainly not a massive disappointment following on from the debut outing, Scrublands.  It is, however, fair to say that the second outing is certainly not to the same high standard as the first book and this reviewer would give it an overall rating of 8.1.

In summary, for Chris Hammer’s two fictional outings to date:

We will add a review of Chris Hammer’s next book as soon as it is published.

Let us know what you think of the reviews of Chris Hammer’s fiction above.

link to Karl Marlantes Author Guide And Book Reviews
Karl Marlantes Biography Karl Marlantes was born in Seaside, Oregon on the 24th December 1944, meaning that he will be 76 years of age before the end of 2020.  Seaside is a small logging town and Marlantes attended Seaside High School, graduating in 1963.  He attended Yale University having won a National Merit Scholarship and […]
Continue Reading
link to A Guide to the Thriller Writing of Author Attica Locke
A Guide to the Thriller Writing of Attica Locke Biography Attica Locke was born in Houston, Texas in 1974.  She grew up in Texas before moving from Houston to attend North Western University in Illinois.  Her initial aim was to become a film director, independent of the main studios.  As part of this aim, she […]
Continue Reading